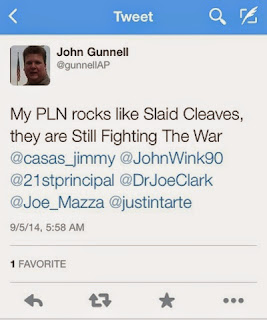 I love Fridays because every so often I receive a #FF from John Gunnell (CLICK HERE), Wisconsin principal and moderator of #wischat (click here) (Sundays at 8p CST). What's unique about his tweets is that he always says that his PLN rocks like a specific song from the cool band. So it got me to thinking,

I want my PLC to rock like a band that never quit rocking as long as it was focused on making music together. For example take Chicago (25 or 6 to 4). That band put out over 20 albums (Hard to Say I'm Sorry/Get Away) and had multiple people in and out of the band over the three plus decades that it was together. Another great band to consider being like would be Van Halen (Jump Video).  They rocked the mic from the day their music hit the air. Frontman, David Lee Roth left the band and pretty much told them that they would be nothing without him. Sadly, he underestimated the power of the band's mission and vision when a new frontman, Sammy Hagar, took his helm.  Van Halen (sans Roth) (Love comes Walking In) climbed to even greater head-banging heights because the band's success was its SMART Goal, not the members' individual accolades.

If you want your band to rock like Van Halen or Chicago, you must commit to building and more importantly maintaining the focus of your band.

Here's 8 Traits of a Rocking PLC!

If you can get your PLC to function like the band, Chicago, the work that you will do will be like "Saturday in the Park".  If you can commit to kids and one another at the deepest and highest levels, your PLC will rock like Van Halen and attain results beyond your wildest "Dreams"