The Fine Line about Mistakes

But there's a Fine Line about Mistakes 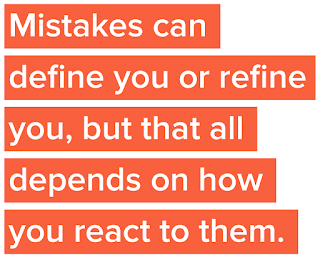 In our work with other adults or children, how we react to mistakes can accelerate progress or stop it all together.  If we prefer progress, we must create a culture of learning where mistakes are not only embraced.  They are expected.

Learners and those that impact learning cannot work in an environment where they are demonized or demoralized when they fail  They deserve to work in a place where mistakes inspire everyone to learn more about themselves, their content, and the world around them.

When mistakes are embraced, people will happily lead themselves to a place of solid commitment and deep understanding.  Mistakes mold learners attempt by attempt, and ultimately every time that the mistake is conquered permanently.

Let's face it. Human are fallible, but we're also malleable.  Successes make us, but mistakes bend us ever closer to finding success.  When we have the encouragement to take risks, the courage to err and the perseverance to overcome, that is when we cross the fine line about mistakes.

This week, challenge yourself  and those you work and learn with to make lots of mistakes.
Mess up miserably.  Your success and your growth will thank you for it.

The #1 Resource Every Teacher Deserves

Resources are necessary to make all teachers successful. Technology, instructional materials, and a good size room are just a few examples of resources that teachers deserve to lead their kids to success. If leaders provide enough resources, teachers are adequately prepared to create meaningful learning experiences for all kids.So What is the #1 Resource All Teachers Need?If you think about all the tools available to teachers, it's hard to think about the most important one that makes the biggest impact of learning. Chromebooks, Google Classroom and other extensions instantly come to mind. Colorful learning environments with the best furniture also sound great. Even the most innovative activities from Pinterest and Teachers Pay Teachers pique my interest, but none of them are the best resource that every teacher deserves.The #1 Resource Every Teacher DeservesIt's no contest. The number 1 resource that every teacher needs is time to learn with other teachers. They need to learn from one another, share with one another, and find solutions to challenging problems together. When teachers are given an abundance of tools, but have limited or no access to other teachers, they will fail to find growth.   Furthermore they will fail to close learning gaps with kids.  But when they network on a regular and structured basis with other colleagues who are in search of continuous improvement, students will always grow and ultimately students will always win.
How can We give Teachers the Best Resource?Leaders must create a culture where teachers learn with and from one another.  They also need to structure school time so that teachers have scheduled time within the school day for job-embedded learning and collaboration.  Without a schedule and a structure for adult learning to take place, teachers will not have time to learn with one another.  If you want your teachers to find the pinnacle of instructional excellence, ensure that you give them the best resource, one another.  They will appreciate you for it.

E, The Letter Missing from the A-F School Report Card

State legislatures have more impact on the future of education than any form of government, and school leaders, teachers, and parents of Texas public schools are gravely concerned about the impact that the new A-F Rating System will have on schools and for good reason.  This archaic form of deeming subjective proficiency served it’s purpose in the 20th century by rating and sorting students, and much evidence proves it does not accurately represent what one person, let alone an entire school, can do.    A letter grade is ambiguous.  It doesn’t tell the whole story about a student or a school, and it is a potentially reckless judgment that in the end will permanently damage more schools and communities than it will help.

Texas legislators are determined to rollout the A-F school report card system as its answer to school accountability.  I have spent the better part of the year trying to understand this system, and now that it is out and schools have their ratings that were billed as "simple to understand and transparent" to parents and communities, I have to admit that I am more confused than ever.  After reviewing the data, I am wondering what the letters A-F really stand for.

Here are my topics & questions to pose to those interested:

Affluence - How does affluence influence an entire school's grade?

Basis - What is basis for assigning grades because it appears to be ambiguous at best and confusing at worst?
Competition - Why does this system appear to be driven by the business model of competition and survival of the "so-called" fittest instead of the medical model which saves all kids?
Diversity - Why do higher diversity & higher poverty schools have a higher probability for earning lower grades?
Fatality - Will communities with schools that have F's be devastated.? Will low grades cause divisiveness in school communities that so badly need and deserve unity and camaraderie?

But There is One Letter Missing from this System

Where is the E? I never understood why there wasn't an E in an A-F system, and the first and biggest problem with the A-F grading system is that it is missing the most important letter, E, which stands for EVIDENCE.  There is absolutely no evidence that an A-F grading system will help schools get better at meeting the needs of all kids.  There is, however, substantial evidence from other states that supports the argument that schools receiving letter grades negatively impacts their schools.  One only has to look to the states of  Virginia, Louisiana, Oklahoma, Florida, and most recently Alabama to see that the A-F system hurts schools.  In all of these states, variations of an A-F accountability system were implemented and eventually were delayed or flatly rejected by the citizenry of those states.  The evidence is conclusive.  Fair minded people know that a letter grade tells only a negative story about schools and does not accurately represent the hard work happening in schools.


What is a Grade? 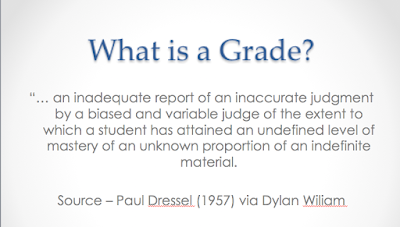 Education researcher, Paul Dressel (1957), gave the most perfect definition of an A-F grading system.  He defined a grade as “an inadequate report of an inaccurate judgment by a biased and variable judge of the extent to which a student (school) has attained an undefined level of mastery of an unknown proportion of an indefinite material”. Schools and their stakeholders already know that they will be inaccurately judged by the state’s inaccurate report because there is more to a school than its performance on STAAR.

Second, they also know that the A-F system, by design, will arbitrarily and inaccurately determine subjective proficiency based on undefined mastery.  The reason for this is simple.  The criteria for assigning the grade will be defined after kids take the test, simply because the A-F system to this day has yet to clearly define what the target is for kids and schools.  Every year, schools take the test only to find out after the fact what was required to pass the test and earn the highest rating.  That by itself is an unconscionable and a reckless thing to do to students and schools.

Third, the STAAR test is biased against all kids because it is an assessment of an indefinite volume of curriculum and standards that very few students in the state could possibly master in a calendar year.  Furthermore, the test doesn’t represent the real learning that students need to succeed in the 21st century.   The grade will communicate little to nothing about student learning, but it will send the message loud and clear that Texas public schools are doing a poor job.

The last and most important reason to oppose the A-F accountability system is because it destroys communities (especially poorer and more diverse communities), and the teachers that serve those communities.  In the days of the AEIS accountability rating system (2002 - 2011) based on the TAKS test (Texas Assessment of Knowledge and Skills), schools earned the following ratings:  unacceptable, acceptable, recognized and exemplary.   Often times these lower ratings were imposed on schools that had higher diversity, higher poverty, more language barriers, less experienced teaching staff, and more subgroups evaluated as compared to their higher rated schools.

Further evidence, shown in the charts below of the latest A-F grades from Texas (January 2017), highlights what appears to be a forced distribution of letter grades assigned in the "what if" scenario of ratings. The charts show a clear preponderance of evidence that schools with higher levels of poverty received grades of C, D & F while schools with lesser levels of poverty received grades of A & B.

In a system that was also flatly rejected by parents, educators and communities, schools rated as exemplary and recognized benefitted directly from schools rated as acceptable and unacceptable in large part due to the negative message conveyed by the school’s rating.  No matter how much the lower rated school did for kids, the rating labeled the acceptable and unacceptable schools as dismal failures.  When schools received their ratings accompanied by a litany of potential sanctions and punitive actions for underperformance, lower rated schools saw many higher performing teachers resign to move to higher rated schools.  Additionally, the movement of higher performing teachers to higher rated schools created a vacuum in the lower rated schools which left openings (once occupied by highly successful teachers) to be filled in many cases by either new teachers, less experienced teachers, or in some cases uncertified teachers.  In short, lower rated schools often faced greater challenges educating students, and those challenges were left to be addressed by a less experienced staff each year.  Kids in lower rated schools were hurt by the negative message communicated by a low rating, based on one test on one day.


Are You For or Against Texas Public Schools?

Legislators must decide whether or not they want to help 5.2 million students or not.  If they are for Texas public schools, then they must explain to constituents how labeling 90% of schools as average or even deplorable will help kids, support schools and make the teaching profession attractive.  The A-F School Rating System will do little more than exacerbate the false narrative that Texas public schools are failing.  From the parent, educator, and board member perspective, there is great concern that A-F will create an even larger dilemma because schools will be required to be labeled as failures no matter how well they perform.  Additionally this forced failure model will quickly create a culture of fear that will scare the very best teachers away from the most challenging schools to run for the perceived safety of higher rated schools.  Schools that are predominantly rated as C, D and F (55% of Texas public schools) will inevitably be left with more vacancies in critical teaching fields that will in many cases be filled by applicants that are less experienced and less equipped to meet the diverse needs of students.  Furthermore, the rating system will inevitably create a culture of fear that will dissuade potential teachers currently in high school and college from pursuing the profession.  A-F will ultimately make the teacher profession less desirable and less attractive than ever before, and in the end, communities with these lower rated schools and the students in them will be negatively impacted for years to come.   There is nothing in the A-F system that will help schools, educators, and students grow in their learning, and for this reason all Texas should adamantly oppose this system or any other rating system like it.