Give Teachers the Gift of Presence

Christmas is around the corner and that means one thing, presents. This month I talked to principals about the importance of No Excuses in November which challenged everyone to push the envelope beyond their comfort zone. But after Thanksgiving, principals must be reminded that December is a leadership tool specifically designed to solidify the changes that have been made this year.  And to do that, we must make time to give thanks for all of the hard work that people are doing.  The reason for that is simple. January will be here before we know it, and we will begin to stretch ourselves again with a New Year's Resolution. December in many ways is the season for giving, not pushing.

What are you giving your teachers for Christmas?

When I ask this question of principals, I get lots of different responses. Most of the responses typically revolve around some sort of gift or an action of appreciation. (Check out my COBLOGGERATION page for ideas) While these things affirm people and their efforts, we must remember that the excitement from receiving a present wanes over time. In other words a tangible present's effect doesn't last for very long.

So what should we give our teachers for Christmas?
Well first off I think that teachers like and deserve presents as well as actions of appreciation. In fact I believe in this so much that I spent every December as a principal showering teachers with presents and appreciation (See The 12 days of Christmas for Teachers). But honestly I think teachers and staff members need something more than presents.

They need Presence.
There are 2 types of presence that leaders should give their teachers. 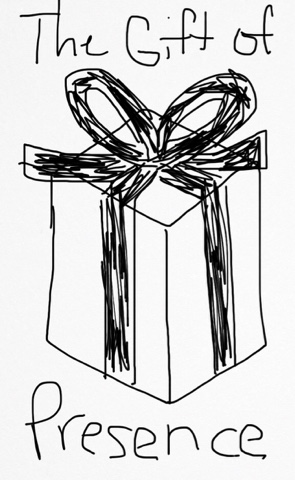 Personal Presence
Teachers and students need to see a leader who is present in the moment and has a deep desire to connect with those that he or she leads.  When leaders spend time before break with their staff and students on a personal level, confidence swells and affirmation subconsciously grows.  Principals must make a conscious effort to be overly present with teachers and staff and use this presence to affirm effort and show sincere appreciation.

Reflective Presence
Leaders mustn't stop with personal presence. They should spend the month reflecting with staff members to identify practices that are successfully contributing to student achievement and processes that are excessively laborious, redundant or monotonous. By being present at this level with the staff, leaders send staff members into the Christmas break with a sense of hope that the new year will be better than ever before. Principals should reflect with staff members about the work of the first semester and determine what they will do more efficiently and effectively in order  to move forward in January.

A December to Remember
Using the month of December for organizational reflection is critical because the month of January will be here before you know it. In order to help people make their very best New Year's resolution for self-improvement, reflection is more than just necessary. It's critical. Additionally in order for a New Year's resolution to be effective, all staff members must be given the gift of presence from the leader so that staff members can honestly reflect on their current state of effectiveness and determine where they must grow next.

I hope you make this month a December to remember for your school culture by celebrating your staff with more than the presents of now and give them the presence of mind.
Posted by John wink No comments:

The final chapter to the Hunger Games series came out this week, and it definitely didn't disappoint.  (Don't worry, I won't spoil the ending for you.) As I watched Katniss Everdeen lead the rebellion against the loyalists, I couldn't help but soak in all of the leadership lessons I gained from watching her tireless bravery and consistent courage.   Katniss continuously exposed herself to imminent danger because it was essential to reach her goal of liberating her country.  Mockingjay 2 illustrated 5 leadership qualities that every leader must master if they aspire to lead their organization to the pinnacle of excellence.

Sacrifice
Leaders who are willing to sacrifice their own personal success for the betterment of the organization as a whole accomplish the most.

Loyalty
When leaders visibly display their loyalty to both the success of their organization and to the people that compose the organization, they create a culture of trust and commitment.

Compassion
A leader cannot truly value his organization unless he cares deeply for the people in the organization.

Finish
The best leaders finish what they started.  They set a goal and never give up until that goal is attained.

Are the Odds in your Favor?
Leadership is all about influence.  A leader can positively guide his organization into a new and better world or negatively drive it into toxic misery.  When leaders embrace the 5 lessons from the Mockingjay, the odds will not only be in their favor.  The odds will be transformed into inevitable victory.

3 Exemplars of the Most Excellent People

What is excellence?  How do you know it when you see it?  What does it feel like when it has been accomplished?  See, I think that people mistakenly define excellence as a singular event, a destination, or an unbelievable success, but I don't think that excellence as a place or an event.  I think it is an never-ending dream.  The video below by Mateusz M  instantly hooked my mind to this idea about excellence.  After you watch the video, you will see why.

Excellence is unique, as very few attain it.  It is an addiction that only a few people are crazy enough to crave.  To discover excellence, you must be willing to separate yourself from your comfort zone.  You must go beyond the stability of the status quo and risk everything to find this euphoria called continuous improvement.  In other words, to find excellence, you must embody the Exemplars of Excellence.


The 3 Exemplars of Excellence

Unstoppable
If you want to live a life for excellence, you must never accept the false finality in failure, but you must also never find comfort in the stability of success-ifaction (satisfaction with your success).  Unstoppable people pause to reflect on their succession of progress, but they avoid the temptation of basking in complacency because they are driven to continue down their path OF excellence.  After all for unstoppable people, there is no path TO excellence.

Unreasonable
Excellence doesn't settle for the subpar standards of 'good enough' or the positive praise when short term goals are accomplished.  Likewise, people in search for excellence don't settle, and they don't lower the bar to give themselves a false sense of security. In fact, they continuously raise the bar.  Now don't mistake unreasonableness for being unwilling to compromise with others, because compromise and consensus are tools that excellent leaders employ to stretch their colleagues and their organization.  After all, stretching yourself relentlessly requires to be just a tad bit unreasonable.

Uncommon
People of excellence are abnormal.  They have unique quirks, and they exhibit uncommon behaviors and habits that most others wouldn't dare.  They believe so deeply in their passion, that they don't care if their actions fail to fit the mold of society, because these folks know that society is full of commonness where true excellence cannot be found.  Society, however, is the starting point where excellence begins and the act of striving for excellence is in taking all the commonness that society has to offer and making it uncommonly better than it ever was.  Furthermore, being uncommon demands an unwavering commitment that automatically forces excellence seekers to avoid looking to others for approval. The core of being uncommon is this tiny inner belief that drives their moral purpose which is all that they need to push them into uncharted territory.

Everybody wants what Few are Willing to Pursue

Excellence is a word that everyone uses to describe their goals, accomplishments, and what they aspire to be, yet few truly attain the purest form of excellence. The reason for that is simple. Excellence requires hard work. Excellence demands tenacity. It requires failure after failure after failure, and most people simply don't have the intestinal fortitude to fall 7 times and get up 8. The essence of excellence comes from within. It is in the heart of every person, but only the truly excellent have the mental courage to master their fears of inadequacy and failure.   They see beyond what they currently are, and visualize what they could become when they commit to accept the risk of what might be.

The bell rings, and that means one of two things. It's time to get to work or its time to move to the next class. But what happens between the bell that starts class and the bell that ends the same class? Even if you don't have bells, you have a definite time when each class begins and when it ends.

Think about the phrase, "Teaching Bell to Bell".  If you have said it or heard it, you know that the focus can only be on one thing, the work done by the teacher. Here's the problem with that phrase.  It is in direct conflict with the whole purpose of education, student learning.  If the focus is mostly on what the teacher does, I can assure you that the variable will always be what students are learning.  Sure, teaching impacts learning, but teaching from bell to bell prevents both teachers and leaders from focusing on learning.  To keep the focus on learning, we must shift our primary and traditional focus from teaching to learning. The longer that we talk, the less likely kids will listen.  With every minute that we speak, student engagement fades into oblivion because it is much more difficult for kids to actively and cognitively engage in learning; therefore, it is critical to remember that if we truly want the focus to be on learning, then we must always be cognizant of how much our talking or lecturing prevents kids from getting to real work of making meaning of their learning instead of our teaching.

2. Student Work Exceeds Teacher Work
If the focus is on Teaching Bell to Bell, the teacher will always work harder than the students, but if the focus shifts to Learning Bell to Bell, the role of the teacher will transition into more of a facilitator.  When teachers structure time so that students work every minute of the period, it will provide a great opportunity for students to work more and hopefully harder than the teacher.


For Whom the Bell Tolls
If your focus has been more on teaching than learning, it can be hard to make the shift, but when our focus successfully and consistently zeroes in on learning, we will eventually see the improvements in learning that we desire.  Initially, it can be a challenge because our natural need for control will force us to believe that rigorous learning can't occur unless we're teaching each student. But if we can create meaningful learning opportunities that kids will gravitate toward, there will be a natural transition from students serving as followers of teaching to leaders of their own learning. If we can shift our talk to action, create relevant learning environments that require meaningful student work and require the responsibility for learning to become a collective responsibility, there will be no reason why teaching would be anyone's focal point.  That would be because teaching would successfully transform itself into the primary purpose, facilitation of learning.
Posted by John wink 2 comments: