Culture says everything about your school because it reflects the values, goals, and aspirations of the community at large. While some cultures possess values that are selfless, others take on a “me first” mindset. Other cultures value winning at all costs while a few value the reputation of their collective character above the results that the culture strives for.

Take for instance, the Japanese fans at the World Cup whose culture created a viral impact on the world. No matter the result, the Japanese fans supported their team to the very end and then the did the unspeakable.  They cleaned up the stadium after the game. Yes, they cleaned the stadium.  Have you ever done that after a game or better yet at the visitor’s home?   The video below illustrates why they do this abnormal activity.

So what lessons can we take from the Japanese?
Here are a few take-aways that I believe can benefit all schools and the people inside those schools. 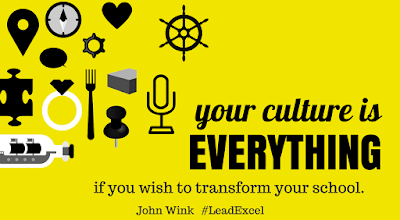 I was truly inspired to be a better person by what the Japanese displayed, but more than that I was challenged to build a culture that emulates the Japanese spirit.  They could have been cocky when they won or bitter when they lost, but their culture was never either of those selfish postures.  That's because their culture not a ‘winner’ culture.  It is a ‘winning’ culture, and they spread their winning spirit by showing reverence, displaying respect and most importantly demonstrating unbelievable selflessness.

I think in this time of rudeness, divisiveness, and at times downright hatefulness, our country could use a few plays from their playbook.  Our schools can be the catalyst that actually changes this nastiness that does little more than tear people down.  I say we give it a try.  You never know.  It might definitely make our schools better for all kids, and it could even make our country better for its citizens.