#TxEd - You Have 2 Choices: March or March

The other day, I ran into a teacher friend of mine, and she said,

"John, you haven't said anything about the Texas special legislative session".

She's right. I have been under the radar so to speak this summer.

So today, I'm going to surprise you.  I'm NOT going to talk about vouchers, school finance or even A-F.  I'm NOT going to lament the decisions that the Texas Senate is making on public education, and I'm not even going to advocate for a bill, today.


I'm going to talk about YOU,
and this is what I have to say. 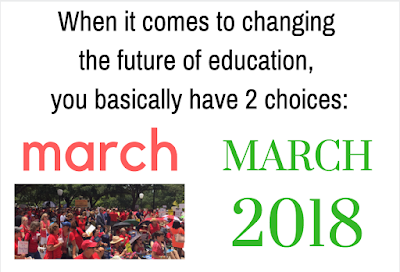 March - Educators across Texas are inspiring me by going down to the courthouse and even the Capital to state their position on education.  The great thing about this kind of march is that it tells legislators what you are for and what you are against.  Marching is a very powerful action as it sends the message loud and clear that you don't like what's going on.

March -  This March makes all the difference in the world.  Here, you show up to the voting box at the March primaries and vote for candidates, who will legislate on behalf of the 5.3 million students in Texas.  This kind of March is  the only way to make substantial change because voters are selecting the people who can make the changes that education needs.


The Choice is Yours
So will you march or not?   I truly believe that educators can't say they care about education if they don't march.  If you want to move the needle for education, you can physically march, but if you don't show up to vote and (even more important) encourage others to vote in March, you will have wasted all of your energy.  March is the only choice we have to improve education.  Now the only question left becomes this.

Will the education profession show up and March?