The Biggest Barrier to School Improvement

In all my years in education, one of the most confusing concepts is something that is disguised to serve as the great clarifier of learning. When progress needs to be defined, you go to it. When decisions are made about kids, you depend on in it. And when determining the best and worst, it is your number one go-to source.

Here's the problem that I have with grading. Every time a new idea about improving instruction is levied, the first question that pops up is this.  "How are we going to grade that?" A suggestion to move to project based learning gets a visit from "How will that affect our grading policy?"  When a kid who normally makes As is making a C in a rigorous class, grading once again shows up to be the catalyst for lowering standards. If a kid makes a 68 in a class for the grading period, it prompts a challenge to the grading system as a whole

Ever Experienced One of These Issues?

Of course, you have.  The fact is that we have been institutionalized by the 20th century grading scale. To prove my point, can you identify the instrument in this picture below? 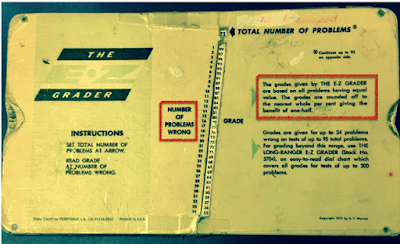 Everyone knows what this is and everyone knows that it is the basis for how we have determined proficiency for almost 100 years.

Are Schools about Grading or Learning?

If we truly want to improve school, we have to make a decision if we are driven more by grading or more by learning.  This is the question that we all must answer when trying to do what's best for kids. The reality is that numbers don't tell the story of learning, and an "averaging" mindset simply will not tell me or other parents what their child is actually learning in school.

As educators and ambassadors of Future Ready schools, we must be vigilant in creating learning spaces that are actually driven by learning instead of grading.  Sure grading is necessary to communicate progress, but it shouldn't inhibit schools from becoming progressive.   We must recondition ourselves and our students that we don't do work for a grade. Learning as an active pursuit of knowledge and mastery not so that we can figure out how to get the highest number we can in the gradebook. Finally, our moral imperative must end the idea that the smartest, best and brightest students are not identified by the average of an infinite set of numbers that are generated by mastery of an undefined set of skills which are to be judged by an arbitrary and partial grading system.

We are better than that, and our kids deserve schools that are focused on learning first and how to rate or grade learning second.

DROP ME A COMMENT BELOW TO LEAVE YOUR THOUGHTS...
Posted by John wink