Independence: It's not a Day. It's our Future

Happy Independence Day!  On July 4, 1776 we claimed our independence as a sovereign and independent nation and for the last 240 years this day has been one of national pride and celebration. In fact the 4th of July reminds us of the importance of living our lives free from the tyranny of dependence. But the question we must ask ourselves is this.

Do our Schools and Classrooms create Dependent Followers or Independent Learners?

The future of our independence is completely dependent on the generation sitting in our classrooms right now. If kids don't learn how to be independent learners right now, they will be conditioned to be dependent on someone to provide for them for the rest of their lives. If school leaders fail to create schools that teach students the value of independence, we are doing tremendous harm to our kids. But if we all create learning spaces that fail to transform the 20th century learning paradigm of dependent followership into the 21st century learning mindset of independence and interdependence, we may be doing permanent and irreparable damage to our nation. 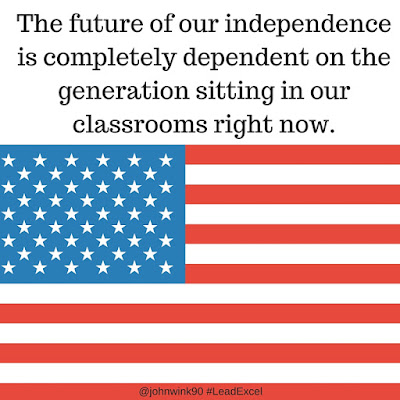 The Greatest Threat
The greatest threat to our nation is not the economy, national security or even health care. It is creating a generation of dependent people who will have failed to learn the most important lesson of all time, that a nation of dependent people will ultimately relinquish the very freedom that we have treasured for over 240 years. Dependence on others was the very reason why our forefathers were fed up and fought to no longer be a dependent nation, and maintaining our independence is the only way that we will preserve our democracy.

The Greatest Challenge
Educators, parents and community leaders must remember that our mission is to work together to create schools that create independent individuals, self-reliant students, and hard-working contributors. We must accept our moral imperative that we don't teach content. We teach kids, and we must teach them that in order to be successful, they must be ACTIVE learners: