What Kind of Set is in your Mindset?

I love a good play on words, but this thought has consumed me this week.  I read the article, "There's More to Mindset than Assuming You have It", and it made me  ponder this question.  What kind of set is in my mindset?  Sure, I can espouse the necessity to embrace the research about growth mindset, and I can justify how I and my work are all about growing, but I have to admit that I catch myself sometimes making a statement that more closely mirrors a fixed mindset than one of growth. 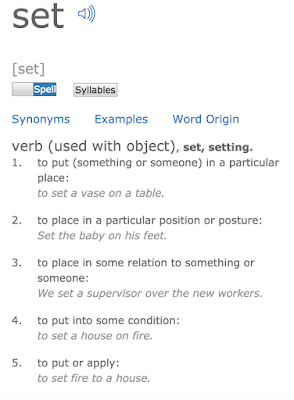 So I decided to research the word, set, and here is what I found at dictionary.com  When thinking about the word as a noun, I found it to be a collection of static and inflexible objects that only serve one purpose.  Take for instance a chess set or a set of golf clubs.  Each part of the set is necessary, but the part itself can never be changed. As long as the set remains the same, the game will never change.  In our work, our rhethoric can change all it wants to, but if the mental tools and processes that we use to do our work never change, then our minds are pretty much set; therefore, our work and effectiveness remain the same.

But, when I looked at the definition of set as a verb, my mind started to move.  When we transform our thinking about mindset from a noun to a verb, we move our thought processes around.  We rearrange them into a new particular order.  Our long held beliefs about things become reconditioned as a result of placing them in a new set of parameters.  Our suppositions are put to the test when we apply them in a new context.

You see our mind is a muscle, and when we fail to put it to action in new and unfamiliar situations, it loses its power to create.  When we fail to place it in a new setting, it loses its agility.  If it never receives any pushback to the "way things have always been", it becomes set in its ways.

Mindset is a noun, and it always will be in the English language, but I would challenge you to think of it in a different way.  Every time you say or think of the word, I would encourage you to see it as an attitude of action as opposed to a static state of mind.  After all, our thoughts eventually become our actions.  Let's just hope they become actions of growth rather than a solidifier of the status quo.