Leading with a Parachute

I had a once-in-a-life-time opportunity to fly in a World War II plane.  Needless to say it was a 'Bucket List' experience.  As we were getting ready to take off in this awesome piece of history, I asked myself this question.  Where is the parachute?  I mean it is a beautiful plane, but what if it breaks down?  What if we take a nose dive?  While I had complete faith in the pilot, I had to ask this question.  After all, we were only talking about my life. 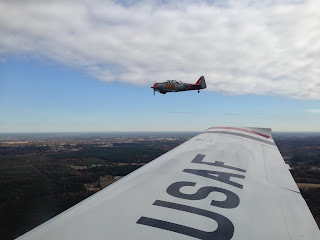 The fact is this.  No leader wants to jump out there without some kind of insurance.  We all want to know we will be okay if the plan fails.  We all want some type of parachute to protect us as we try to soar into the wild blue yonder.  So what are the different types of parachutes that leaders have in place before letting their leadership ventures take flight?

Understanding Teammates
Leaders need empathy from their fellow teammates.  People don't always understand the rationale behind decisions; therefore, the leader has to take time to make sure understanding is in place when a plan is about to take off.

Trusting Relationships
Developing trusting relationships are the key to successful leadership, but this idea couldn't be truer when plans fail.  Relationships save leaders from crashing and burning.

Exit Plan
Not every leadership idea works.  That is why leaders need to make sure they have an exit strategy.  Exit strategies are better than running the entire organization into the ground.

When leaders take time to pack a parachute, chances are they will survive leadership failure.  Leaders don't pack a parachute planning to wreck the plane.  They see the parachute as a required tool in place every time a new idea takes flight.  Most ideas work, but the parachute is in place to make sure that a failed plan doesn't ruin the leader's credibility with the staff , but more importantly doesn't wreck the culture of the organization.  Parachutes only work when the leader pulls the rip cord and that can only be accomplished when the leader is committed enough and humble enough to admit he failed.
Posted by John wink