Give Feedback that'll have your Teacher’s Back

Here is the reason why feedback perplexes leaders. When a leader tells an employee something from a position of unilateral leadership, that’s not feedback. That’s advice. That’s an opinion. That’s a directive. That’s actually one person‘s perspective, but it’s not feedback because feedback is the result of collaborative teamwork not a leader’s job description.

So what is feedback?
Think of feedback is something you give back. It’s something you come back with to help someone get better. In other words feedback is act based on a relationship with a solid foundation, and it can’t occur with out something very important first. The prerequisite that I am referring to is growth goal based on trust and mutual understanding.

Think of it in this way.  Feedback is essentially food for thought. It brings people to the table as opposed to pushing them away. It fills their confidence, but it also makes them hungry for growth.  It quenches their thirst while simultaneously causing them to develop a new thirst for knowledge. 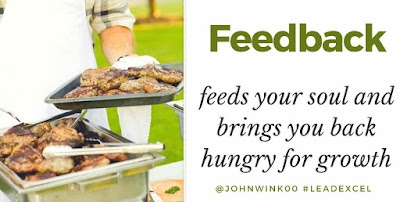 In order for feedback to work we must have a common goal that both the leader and a follower agree is necessary to work toward. Without it, feedback will be perceived as a blindsided comment or judgment. It’ll be what the leader perceived as helpful advice but for the receiver it’ll came out of left field which could lead the receiver to have fear and resentment rather than trust and teamwork. Feedback without a goal that both people share actually prevents feedback from working.

Feedback feeds growth, and leaders who care about the health of their employees don’t start with feedback. They start with a goal and feed the employee with strategies, questions, and suggestions to reach the goal.  In its purest form feedback feeds not only the follower but the leader and his skill set in helping or better yet feeding the follower as he works to reach that goal.

Feedback always has the teachers back, and that’s a fact.
Posted by John wink